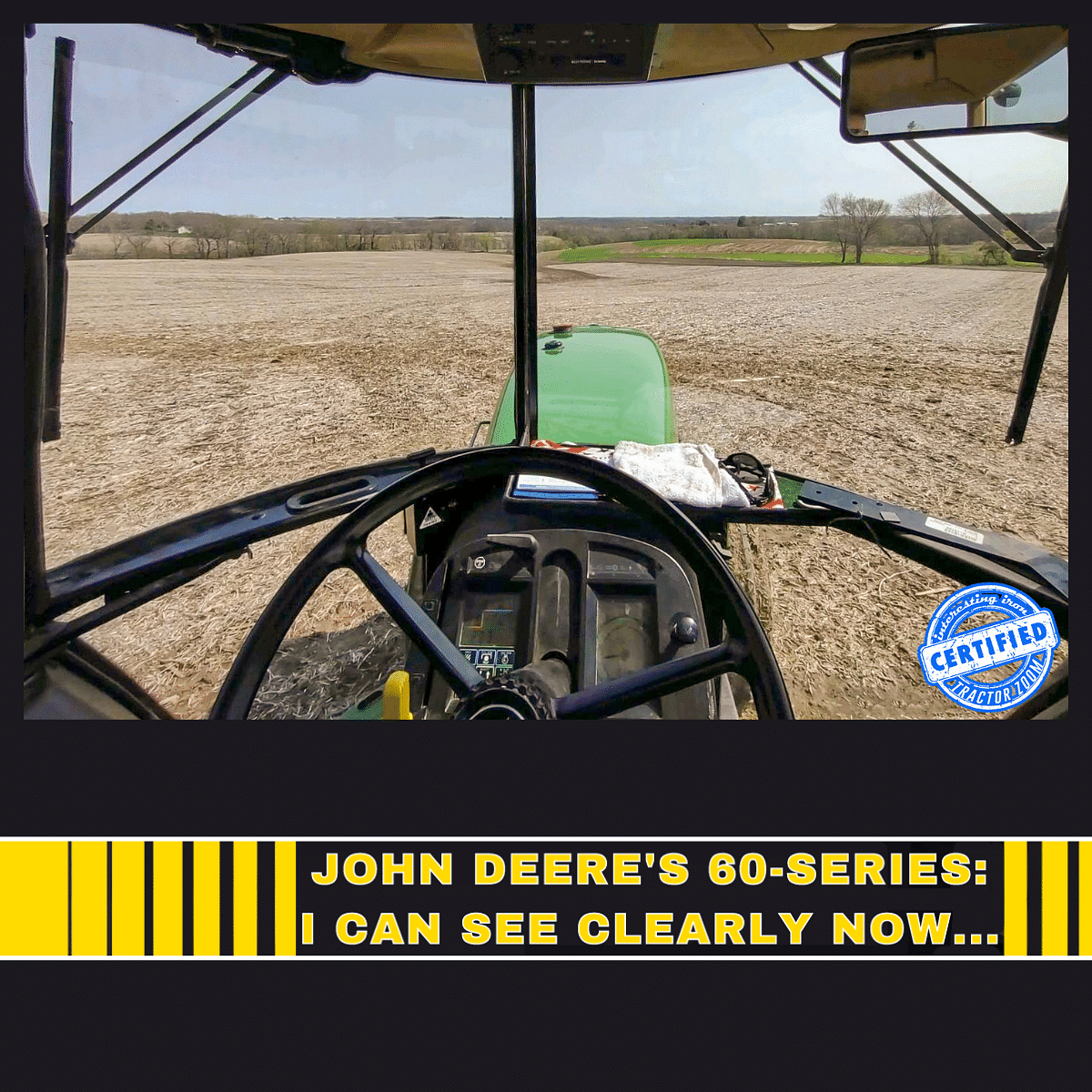 Today’s Interesting Iron is all about the John Deere 4960…the one where they got it right.

At least that’s what a lot of Deere guys tell me, at any rate.

I know this for sure; the 60-series Deeres have a very loyal following, and there’s got to be a reason for that. Let’s dig in and see if we can’t figure out why!

We’ve got a handful of ’em listed on Tractor Zoom right now – about half and half dealer vs. auctions.

Check ’em all out here.

John Deere has built tractors for over 100 years now, and as we all know, they’ve done very well. But up until 1992, they’d always suffered from a problem; visibility. The air cleaner and the muffler always got in the way, making it hard to see oncoming vehicle, a wet spot in the field…whatever. And over the years, that just became a thing that operators dealt with. We all learned to live with it. Every other tractor manufacturer had to deal with this, too – it wasn’t just Mother Deere.

The Sound Gard-era tractors were no different.

If anything, they might have even been a little worse. With the addition of the Sound Gard cab (or body, if we’re being nitpicky), there was the seam in the windshield to deal with. Deere’s engineers did the best that they could, lining up the seam with the air cleaner and muffler, but still, it was another thing that got in the way.

Even Henry Dreyfuss, Deere’s chief designer, didn’t like the way the hoods looked. He tried multiple times to find a solution with his team at HDA, but failed. It annoyed him right up until the day he passed in 1972.

That all changed with the 60-series.

I can see (more) clearly now…

Finally, in the early 90s, Deere’s engineers addressed the visibility issue with the Sound Gard tractors. They didn’t fix it completely, but they made it a LOT better.

They redesigned the intake so it wasn’t pulling through an air cleaner sticking through the hood. By pulling the air through the nose of the tractor and moving the air filter, it freed up enough room under the hood that they could shove a muffler in there, and route the exhaust off to the right hand side where it wouldn’t get in the way. Since it was going to be close to the cab, they ceramic-coated the inside of the pipe to help keep the outside cool. That’s why you don’t see peeling paint on the right fenders of the 60-series tractors.

Furthermore, they still managed to keep the cab fairly quiet!

At the end of the day, like I said, the solution wasn’t perfect, but it was a massive improvement.

Armchair Quarterback questions that keep Ryan up at night…

The solution seemed simple enough (in theory), right? So why didn’t Deere address it sooner? I mean, the dimensions of the John Deere 4960 hood are nearly identical to that of the 4955. Why hadn’t this already been done? And if we’re going down that road, why not do it with the small-frame tractors and put this whole thing to bed for good?

Honestly, I don’t know. But I do happen to know a historian for Deere’s diesel engine program, and I sent him an email picking his brain about it a little. When I hear back, I’ll update the article with the results of said brain-picking! Stay tuned!

(Sidenote: I suspect I know the answer to the small-frame part of the question. Despite sharing engines, I have a feeling that the proportions wouldn’t have worked out the same way. Engines still need to breathe, and I suspect that there wasn’t enough room to stuff a same-size intake under the hood along with a muffler. At the end of the day, the engine would’ve been starved for air. No air = no power.)

Other innovations on the John Deere 4960

While the biggest improvements were found under the hood of the big-frame Deeres, they weren’t the only new features. The 466 was the most efficient it had ever been, and according marketing, it was the class leader. The Nebraska lab tested it at 11 gallons/hr., which is over 2 gallons less than the Magnum 7150! The recently-introduced Caster Action on the MFWD models offered 10° of tilt on the front axle (where other competitors only allowed about 5°), allowing for some seriously sharp cornering – especially for a big-frame tractor with a 118″ wheelbase!

Other notable features were mainly centered around creature comforts and operator safety. The introduction of the “new style” steps with a handrail made entry and exit a lot easier. They also rotated a full 20° to accommodate things like saddle tanks and variable row spacing. The “new style” steps have become a pretty common upgrade in the Sound Gard world. If you’re ever looking through auction or dealer listings for previous-generation Sound Gard tractors, you’ll usually see it in the description!

The John Deere 4960 also offered an optional big time lighting upgrade, which offered full 360° visibility at night. This was a popular option based on our Iron Comps data. Out of the last 20 sold at auction, 18 of ’em had it. I wouldn’t swear that all of those lights were working when they crossed the auction block, but they all had ’em mounted!

The verdict: Good to go…most of the time.

Well…yeah. I think it is.

Is it the best one Deere ever made?

I don’t believe in a “best one ever made” and I never will. I firmly believe that innovation and technology lead to better results, even if today’s equipment doesn’t have the duty cycle that the old stuff has. To me, that’s common sense, and I’ll die on that hill.

But…I do believe that they’re a very good tractor, and I’d recommend one if the situation was right. I had a conversation with Jeff Bahl, owner of Slabtown Tractor Repair in Lancaster, WI, and asked him about 4960s. He’s a John Deere specialist, and in southwest Wisconsin/northeast IA, he’s the go-to for Sound Gard-era tractors. Furthermore, over the years, he’s built a reputation as an expert when it comes to Powershifts (he’d never outright say that, but I will). He’s worked on dozens of 60-series tractors, and owns a 4960 himself.

Stuff to watch for…

According to Jeff, the perfect 4960 is an early one like that one from C&B that’ll be available this fall (it was the 64th one built). The reason for this is that early ones are more likely to have a mechanical fuel pump. This makes them less prone to failure than later models which used an electronic pump. If the governor in the electronic pump fails, it’ll keep pushing fuel to the engine until it eventually blows a head gasket and snap the head bolts. That can be a spendy ordeal to fix.

(Unfortunately, I don’t know that there’s any published information as far as serial number breaks where they switched over to the electronic pump. There aren’t a lot of mechanical 4960s out there, though.)

The air intake design, while a good innovation on Deere’s part, wasn’t without some hiccups. The air filter is very prone to clogging – especially during harvest when there’s a lot of dust and/or cornstalks in the air. At one point, there was a plastic insert in the catalog to help mitigate this, but I’ve heard that it’s been discontinued. There may be a few sitting on dealer shelves yet, but you may need to do some calling to get your hands on one.

He also thinks that the 60-series Powershift was integral in strengthening today’s transmissions. But, like all things, even the toughest transmissions will wear out, given enough time. If there’s no damage to the housing or the drum, you could get away with a $10K bill, but if it’s a full-blown major rebuild, $20K isn’t out of reach. As with all farm equipment, maintenance is everything on these older tractors. If you’re looking at one, get as much history as possible!

First, let’s address the elephant in the room. Yes, that is a nuclear reactor in the distance in Gavin’s photo. You oughtta see the yields he gets in this field. 😂

Second, shameless plug for Gavin…his popcorn is OUTSTANDING. Our office literally lives on his popcorn. We probably buy 30 pounds a year from him. You should too. It’s awesome stuff! Hit the photo to go to his website and buy some!

They’re definitely workhorse tractors, with the power and weight to still be a very viable option on a modern farm. Although they were tested at 200 PTO horsepower, tribal knowledge suggests that a lot of these tractors rolled off the assembly line a fair bit hotter than that. Dealers and repair shops alike have dyno’d stock tractors at 225 or more on the PTO, so they’re a little like the 6030 in that regard.

However, with a 118″ wheelbase and a 1000 RPM PTO, they’re not quite as versatile as a smaller tractor (i.e. a 4455). There again, though, it’s all situational. If your loader tractor needs to be pretty beefy, and you’re not looking at new, this is a great option. You know what size tractor you need.

The 60-series tractors were just about the last of the green tractors built for a long duty cycle. Deere built them such that they could be rebuilt when stuff wore out, and for the most part, those parts are still on dealer shelves. After that, the duty cycle standards started gradually changing. Technology was changing fast enough that it no longer made fiscal sense to hang on to a tractor for 30 years. The capabilities of a newer machine would pay for itself faster for a farmer expanding an operation. I get that, and I see the reasoning behind it.

Still, I love old iron, and I always love seeing these tractors earning their keep on farms across America! For a lot of farmers (especially for young farmers just getting started), the 4960 is the big horse, and it probably will be for years to come!