2022’s most interesting iron at auction…Part 2! 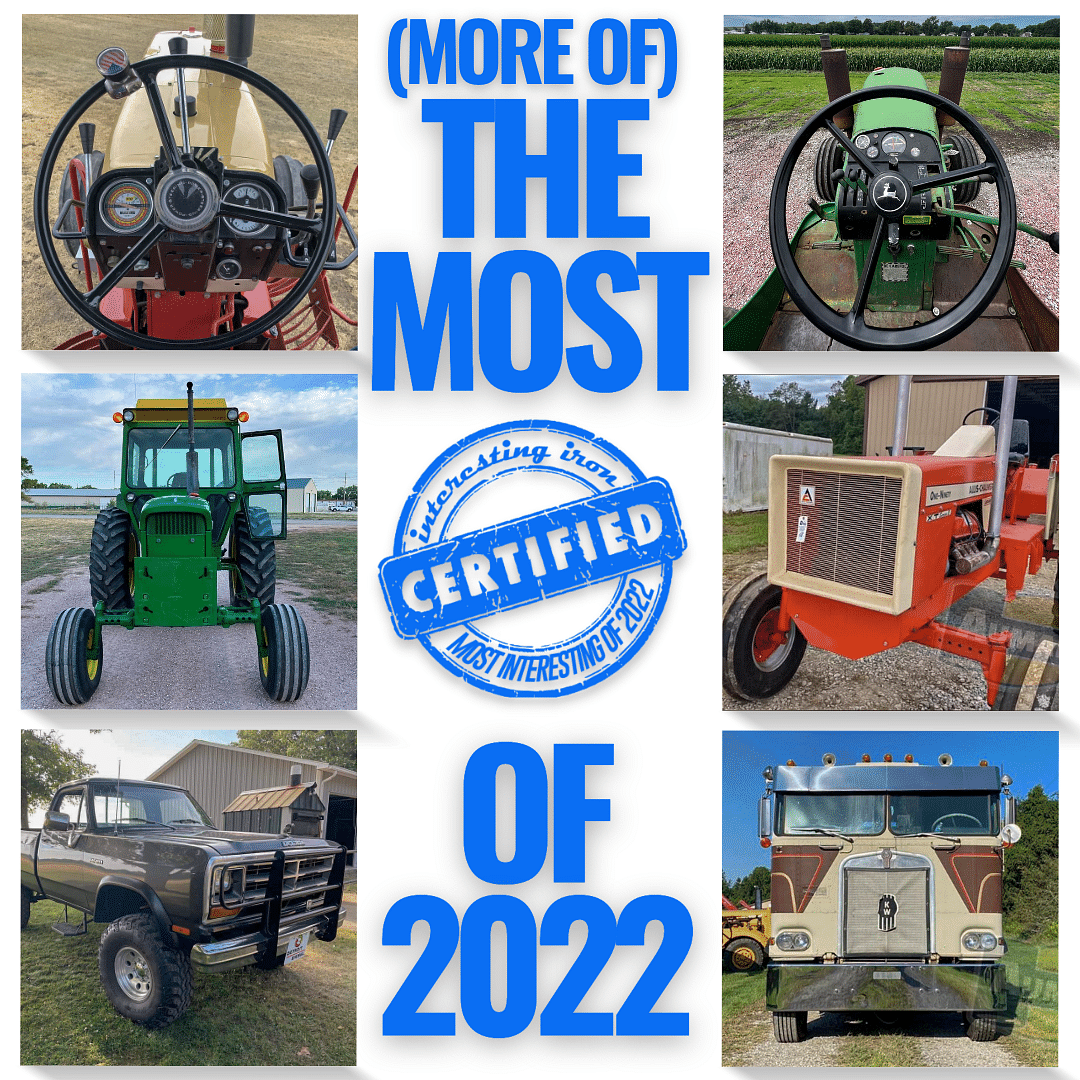 So let’s pick up where we left off on the list of 2022’s most interesting iron that I never got to write about, shall we?

Every year, there are dozens of tractors, trucks, and pickups that just seem to slip through the cracks. Usually it’s a case of bad timing; it falls on a week where I don’t write a column, or it’s a late arrival to Tractor Zoom. It’s the nature of the beast, and there’s not much I can do to get around it. Still, these machines deserve a mention, so every December I try to put together a wrap-up list. (You can see the first half of 2022’s most interesting iron here.)

Over the past few years, I’ve become quite fascinated with re-powered tractors. It doesn’t matter if it’s a Funk-converted 8N, a Kinze with a big Detroit, or some dude in his backyard shoehorning a Buick into a Farmall M. Whatever it is, I really love the idea of using what you have on hand to make something work better. With modern farm equipment that’s controlled by computers, we just don’t see that kind of ingenuity anymore.

About a year or two ago, I learned of a guy named Ed Mead from Amboy, IL. He was a farmer, but with a big family, he also had a full-time job as well. Those responsibilities didn’t leave him with a lot of time to farm, so he had to be efficient when it came to stuff like field work. To do that, he needed more power out of the machines he already owned. So he started re-powering tractors.

To make a long story short, it didn’t take long before the re-powering idea turned itself into a business for Ed. Initially, he’d relied on Detroit Diesel for power; however, in the late 60s, he made the switch to Cummins power. For the big tractors, a naturally-aspirated 903 Cummins became the powerplant of choice.

Ed’s son Tom sold these two tractors on an Illinois auction this past June, and they definitely got a lot of attention! I really wanted to get down to that sale, but I had commitments on a pulling track in the other direction that weekend. The 5020 ended up selling for $31,000, which I think is fair money considering the pedigree. It’s a neat piece of history!

Incidentally, you haven’t seen the last of this 903-powered 5020. It went to a good friend of mine and at some point this summer, I’m going to take a closer look at it. It’s become a prized possession for more than just the historical significance.

Had it not been for a comment on a Facebook post from a guy I know down in Tennessee, I’d have missed out on a really neat story. Cody, if you’re reading this…thanks for the heads up!

This unique 190XT was built about fifteen or twenty years ago by Dennis Bobb. For those of you who have followed tractor pulling for a while, you might remember that name. Dennis and his brothers Marvin & Danny built and pulled D-21s for years, and had quite a bit of success. They won a points championship, the Indy Super Pull, and lots of event wins.

When Dennis decided to retire from pulling and farming, he spent a lot of time out in the shop tinkering with stuff – mainly to keep out of trouble. That tinkering led to seven very unique tractors that came to be known as “The Johnny Cash Tractors.” He essentially built them one piece at a time using stuff that he had laying around. This 190XT is #3 in that series.

Dennis built the frame and sheet metal himself. The rear end came from a one ton Ford, and the center section of the rear wheels are from an old Co-Op E3. Under the hood is a Ford 400 V8 out of a truck, and it’s mated to an automatic transmission with a 4-speed manual behind it! This tractor could run as slow as you wanted, or fast enough to scare the daylights out of you!

The tractor wasn’t really ever meant to do much work per se; it was more a challenge to stay sharp, and to prove to himself that it could be done, y’know? Call it a project, call it functional art, whatever you want. However, at the end of the day, somebody got a killer deal on a head-turner of a tractor! It’s amazing what some people will do to keep busy after they retire!

A Dodge that turns fuel into smoke and noise…LOTS of noise.

What happens when you drop an ’85 body on a ’78 frame, give it a 4-speed manual, full time 4WD, and a 6V-53 Detroit? You get a perfect recipe for blowing smoke and waking the neighbors for about five square miles! This was a really neat build!

Is it practical? Not in the slightest.

Is it fast? Highly unlikely.

But is it cool? Absolutely – so long as you’ve got earplugs handy. 35 mph on a backroad never sounded so good!

Based on what I can tell, somebody put some time and effort into building this truck – likely for no other reason than they thought it was cool. It was nearly complete, too; there wasn’t much left to do other than paint-match the tailgate. The truck apparently sold for $10,250, which is a screamin’ deal from where I’m sitting. I’ve got a call in to the auctioneer to see if there was more to the story. If there is, I’ll update it here.

In my opinion, this truck is kind of similar to that 190XT that Dennis Bobb built. It wasn’t meant to do much other than look pretty, and make the driver grin from ear to ear. I think it was built more as a “because I can” than “because I need it” – and that’ll always be cool in my book, even if it only turns fuel into noise and smoke!

I’ve said it before, and I’ll say it again. The 1456 is what happened when Harvester’s engineers had free reign to build the tractor that they wanted to build. If ever there was a factory hot rod during the horsepower wars of the late 60s/early 70s, the 1456 was it. Everything about that tractor was built to trounce the competition…and by most accounts, it did!

For 1970, IH borrowed some gold paint from the truck division and painted the hoods of a small handful of these tractors to promote their hydrostatic transmissions (and clear out existing models, as the 66-series was about to go into production). The Golden Demonstrators made quite a statement in the fields during farmer demos!

If a farmer bought one, dealers were supposed to respray the tractor back to its original red before delivery. That’s the way it went most of the time, but every so often one of ’em delivered with the gold paint. Personally, I think some buyers slipped the paint guy a six pack and a twenty and told him to conveniently be on vacation the day their tractor was to be painted…

The thing about Golden Demonstrators is that because there’s no serial number list of what was/wasn’t factory-painted, there have been a LOT of clones made. The sure-fire way to know if it’s a real demonstrator is to check under the hood for gold overspray, and look for an all-black dash. If it’s a 1970 serial number and it checks those boxes, it’s probably a real-deal tractor. I looked this one over pretty carefully and I believe it was the real McCoy.

A souped-up KW that even my grandmother could’ve driven.

This Kenworth K100 looks pretty stock, but it isn’t. Under the hood, it’s got an 1150 cubic inch Cummins KT-450 rated at 450 horse from the factory! However…this one also sports a bigger turbocharger and injectors (and likely a few tweaks here and there to make it all work). I don’t know exactly how big the charger is, but I have to imagine that it makes at least 600+ horsepower.

Here’s the really interesting thing, though. Somehow or another, all of that power and torque is harnessed through an Allison automatic transmission! I’m probably over-simplifying it, but all you’d have to do is put it in drive and go! I’m almost positive that it would’ve been a special order, but I know there are a few of ’em out there. Here’s a video of it in action. Granted, it doesn’t have anything behind it, but this ol’ cabover really gets with the program!

Like I’ve said many times before, I still think cabovers are cool. I know short wheelbase trucks ride like a jackhammer, but c’mon…600+ horse jackhammers are pretty neat, right?

There’s been a ton of content produced about the Westra Auctions collector tractor sale over the past couple of months. However, to the best of my knowledge, nobody’s really mentioned this 1972 John Deere 4020 Powershift. It was one of the last tractors sold that day, and while I’m not one to go bonkers over a 4020, I have to admit, this one definitely made me sit up and take notice. Here’s a quick video walkaround from Westra.

As you can see, it was a very clean tractor, and it had a lot of the right stuff to make it a good seller. Factory air, factory cab, Powershift, and save for a newer seat from a Sound Gard tractor, it was pretty much all original. I talked to Gary Peterson about it earlier today, and he told me that the buyer was a pretty big 4020 collector, and this probably filled a hole in his collection. I never thought it’d sell for $40K, though!

As of today, there have been about 400 2WD 4020s that rolled across an auction block (and into our Iron Comps database) in 2022. This one will go down in history as the highest seller of the year, unless something real weird happens by Saturday!

So there you have it…2022’s most interesting iron that never got a proper spotlight during the year. The thing is, these are just the picks that came off the top of my head and a little digging back through the archives. I’m sure that I missed some truly amazing machines with terrific stories. Maybe someday I’ll compile all of these things into a book and add a few more. Until then, I hope you’ve enjoyed the stories that I got to tell this year, and I hope you’ll keep reading in 2023! Happy New Year, folks!